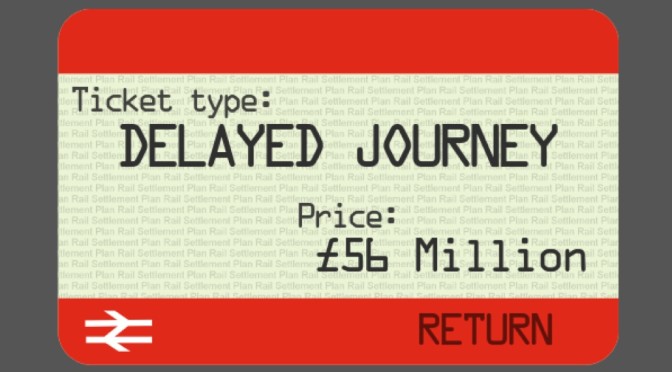 If you cancel a train does it still show up in the delayed trains statistics?

Somerset CCG’s announcement [1] of the delay in their care.data plans came as no surprise, except perhaps to NHS England who effectively denied it, reportedly saying work continues. [2] Both public statements may be true but it would have been good professional practice to publicly recognise that a top down delay affects others who are working hard on the ground to contribute to the effective rollout of the project. Causing confusion and delay is hard to work with. Change and technology projects run on timelines. Deadlines mean that different teams can each do their part and the whole gets done. Or not.

Healthwatch [3] has cancelled their planned public meetings.  Given that one of the reasons stated in the care.data CCG selection process was support from local patient groups including Healthwatch, this appears poor public relations. It almost wouldn’t matter, but in addition to the practicalities, the organisation and leadership are trying to prove it is trustworthy. [4] 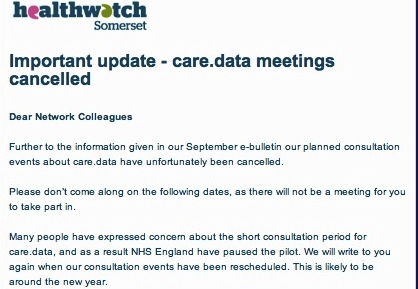 Somerset’s statement is straightforward and says it is applies to all pathfinders:

“Following a speech by Jeremy Hunt, the Secretary of State for Health this week (3-9-15), in which he outlined his vision for the future use of technology across NHS, NHS England has asked the four care.data pathfinder pilots areas in England (Leeds, Blackburn and Derwent, West Hampshire and Somerset) to temporarily pause their activities.” [Sept 4, Somerset statement]

From when I first read of the GPES IAG concerns [5] I have seen the care.data programme hurtle from one crisis to another. But this is now a train wreck. A very quiet train wreck. No one has cried out much.[6] And yet I think the project,  professionals, and the public should be shouting from the top of the carriages that this programme needs help if it is ever to reach its destination.

care.data plans are not late against its business plan (there is none)

Where’s the business case? Why can’t it define deadlines that it can achieve?  In February 2015, I suggested the mentality that allows these unaccountable monster programmes to grow unchecked must die out.

I can’t even buy an Oyster card if I don’t know if there is money in my pocket. How can a programme which has already spent multi millions of pounds keep driving on without a budget? There is no transparency of what financial and non-financial benefits are to be expected to justify the cost. There is no accountable public measure of success checking it stays on track.

While it may be more comfortable for the organisation to deny problems, I do not believe it serves the public interest to hide information. This is supported by the very reason for being of the MPA process and its ‘challenge to Whitehall secrecy‘ [7] who rated the care.data rollout red [8] in last years audit. This requires scrutiny to find solutions.

care.data plans do not need to use lessons learned (do they?)

I hope at least there are lessons learned here in the pathfinder on what not to do before the communications rollout to 60m people.  In the words of Richard Feynman, “For successful technology, reality must take precedence over public relations.”

NHS England is using the public interest test to withhold information: “the particular public interest in preserving confidential communications between NHS England and its sponsoring department [the DH].”  I do not believe this serves the public interest if it is used to hide issues and critical external opinion. The argument made is that there is “stronger public interest in maintaining the exemption where it allows the effective development of policy and operational matters on an ongoing basis.”  The Public Accounts Committee in 2013 called for early transparency and intervention which prevents the ongoing waste of “billions of pounds of taxpayers’ money” in their report into the NPfIT. [9] It showed that a lack of transparency and oversight contributed to public harm, not benefit, in that project, under the watch of the Department of Health. The report said:

“Parliament needs to be kept informed not only of what additional costs are being incurred, but also of exactly what has been delivered so far for the billions of pounds spent on the National Programme. The benefits flowing from the National Programme to date are extremely disappointing. The Department estimates £3.7 billion of benefits to March 2012, just half of the costs incurred. This saga [NPfIT] is one of the worst and most expensive contracting fiascos in the history of the public sector.”

And the Public Accounts Committee made a recommendation in 2013:

“If the Department is to deliver a paperless NHS, it needs to draw on the lessons from the National Programme and develop a clear plan, including estimates of costs and benefits and a realistic timetable.” [PAC 2013][9]

Can we see any lessons drawn on today in care.data? Or any in Jeremy Hunt’s speech or his refusal to comment on costs for the paperless NHS plans reported by HSJ journal at NHSExpo15?

While history repeats itself and “estimates of costs and benefits and a realistic timetable” continue to be absent in the care.data programme, the only reason given by Somerset for delay is to fix the specific issue of opt out:

“The National Data Guardian for health and care, Dame Fiona Caldicott, will… provide advice on the wording for a new model of consents and opt-outs to be used by the care.data programme that is so vital for the future of the NHS. The work will be completed by January [2016]…”

Perhaps delay will buy NHS England some time to get itself on track and not only respect public choice on consent, but also deliver a data usage report to shore up trust, and tell us what benefits the programme will deliver that cannot already be delivered today (through existing means, like the CPRD for research [10]).

care.data plans will only deliver benefits (if you don’t measure costs)

I’ve been told “the realisation of the benefits, which serve the public interest, is dependent on the care.data programme going ahead.” We should be able to see this programme’s costs AND benefits. It is we collectively after all who are paying for it, and for whom we are told the benefits are to be delivered. DH should release the business plan and all cost/benefit/savings  plans. This is a reasonable thing to ask. What is there to hide?

The risk has been repeatedly documented in 2014-15 board meetings that “the project continues without an approved business case”.

The public and medical profession are directly affected by the lack of money given by the Department of Health as the reason for the reductions in service in health and social care. What are we missing out on to deliver what benefit that we do not already get elsewhere today?

On the pilot work continuing, the statement from NHS England reads: “The public interest is best served by a proper debate about the nature of a person’s right to opt out of data sharing and we will now have clarity on the wording for the next steps in the programme,”

I’d like to see that ‘proper debate’ at public events. The NIB leadership avoids answering hard questions even if asked in advance, as requested. Questions such as mine go unanswered::

“How does NHS England plan to future proof trust and deliver a process of communications for the planned future changes in scope, users or uses?”

We’re expected to jump on for the benefits, but not ask about the cost.

care.data plans have no future costs (just as long as they’re unknown)

care.data isn’t only an IT infrastructure enhancement and the world’s first population wide database of 60m primary care records. It’s a massive change platform through which the NHS England Commissioning Board will use individual level business intelligence to reshape the health service. A massive change programme  that commodifies patient confidentiality as a kick-starter for economic growth.  This is often packaged together with improvements for patients, requirements for patient safety, often meaning explanations talk about use of records in direct care conflated with secondary uses.

“Without interoperable digital data, high quality effective local services cannot be delivered; nor can we achieve a transformation in patient access to new online services and ‘apps’; nor will the NHS maximise its opportunity to be a world centre in medical science and research.” [NHS England, September 1 2015]

So who will this transformation benefit? Who and what are all its drivers? Change is expensive. It costs time and effort and needs investment.

Blackburn and Darwen’s Healthwatch appear to have received £10K for care.data engagement as stated in their annual report. Somerset’s less clear. We can only assume that Hampshire, expecting a go live ‘later in 2015’ has also had costs. Were any of their patient facing materials already printed for distribution, their ‘allocated-under-austerity’ budgets spent?

care.data is not a single destination but a long journey with a roadmap of plans for incremental new datasets and expansion of new users.

The programme should already know and be able to communicate the process behind informing the public of future changes to ensure future use will meet public expectations in advance of any change taking place. And we should know who is going to pay for that project lifetime process, and ongoing change management. I keep asking what that process will be and how it will be managed:

It goes unanswered time and time again despite all the plans and roadmaps and plans for change.

care.data plans are never late (just as long as there is no artificial deadline)

The programme can claim it is in the public interest for as long as we are prepared to pay with an open public purse and wait for it to be on track.  Wait until data are ready to be extracted, which the notice said:

…” is thought to remain a long way off.”

All I can say to that, is I sure hope so. Right now, it’s not fit for purpose. There must be decisions on content and process arrived at first. But we also deserve to know what we are expecting of the long journey ahead.

On time, under budget, and in the public interest?

As long as NHS England is the body both applying and measuring the criteria, it fulfils them all.