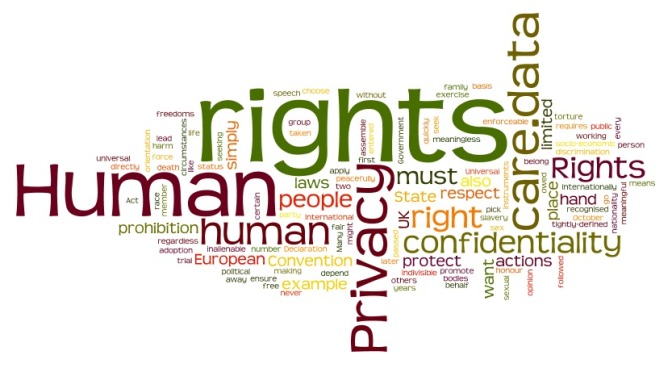 Theories on Thursday, furore on Friday. By Saturday the social media had hit the fan.

What we must remember whilst caught up in the recent Human Rights fuss, is that this is discussing a future theory. In practice, we are at risk of missing three* current and upcoming human rights threats, which are very real.

Whilst future policy change may already be doing harm to the spirit of the human rights law and those ideals today, current policies are having effect today in practice.

The Deregulation Bill, and other current policies and projects.

Regular readers will know, I have followed closely the care.data plans [see past posts] to extract our confidential GP medical records and centrally store, sell and share the information.

I hadn’t realised until recently why I care so strongly about doing this the right way. It simply felt wrong that the original plan was not to inform patients at all, and not ask for consent to remove the foundation stone of our confidentiality. The delayed plan, had a terrible junk-mail leaflet drop.

The current extraction plan is pending [roadmap end of page], but details unknown.

I have concerns about how it will harm the trust in the patient-GP relationship, potentially discriminate and segment certain groups and  I’m still unhappy how open the records will be for use by third parties, not for clinical care. There needs work done to make it done well, and to be transparent and trustworthy for patients.

But I’ve realised now, it feels wrong, simply because it impinges on one of our basic human rights. Our right to privacy.

This post is not about care.data per se, but the recent Bill of Rights debate made me take a closer look at the bigger picture.

There are many discussing this, far better informed on human rights than me. But perhaps it’s time the ordinary public pay more attention to our rights, and where they fit into our lives in the UK. Rights which are easily eroded if we don’t pay attention.

I’ve had a look at the current Bill proposal [my notes & comment at the end], but at least for now, I’m more concerned about the actual plans already underway, which will in  practice,  affect the application of our human rights today, and we may not know it.

There are at least three real changes in legislation right now which I believe should command our attention.

This Bill will go to the Lords Committee stage on October 21st.

This is a real and present threat to human rights, as stated in the Joint Committee Report on Human Rights, June 14th 2014:

The Bill provides that a person exercising a regulatory function specified by the Minister:

“must, in the exercise of the function, have regard to the desirability of promoting economic growth.”
The Government intends this economic growth duty to apply to the EHRC. We believe that applying this growth duty to the EHRC poses a significant risk to the EHRC’s independence, and therefore to its compliance with the Paris Principles and the Equal Treatment Directives as implemented by the Equality Act 2010. The Government is therefore risking the possibility of the EHRC’s accredited “A” status being downgraded and of putting the UK in breach of its obligations under EU equality law. Unless the continuing discussions between the Government and the Commission satisfy the Commission that the growth duty will not in any way impact upon its independence, we recommend that this duty not be applied to the EHRC.

Sections of the Deregulation Act currently passing through Parliament suggest the removal of any regulation that conflicts with the interests of a profit-maker. There are other domestic and regulatory bodies for which we should carefully consider this implication, not least from my perspective, in the NHS.

The Deregulation Bill creates a conflict when a law must consider commercial gain above human rights.

[ref: The Joint Committee report on Human Rights, June 14th, 2014]
The Deregulation Bill also poses some concern for those interested in the requisition process for information, and press representation groups spoke out, worried it offers a back-door for seizing journalists’ material.
Seen all together, aspects of the Bill which is a mish-mash of all sorts of subjects, which was derided in some reports as being about knitting yarn, means it may well be a wolf in sheep’s clothing when it comes to human rights.

Second and Third, the recent changes in legislation & access

Other real threats to our universal human rights in the UK, I consider as points two and three, are already having an effect.

Recent legal changes to both a) the legal aid and b) the judicial review processes mean it is harder for many people to use the available processes due to cost.

(current consultation closing October 15th here and anyone can write to their MP for support, guidance at end of page.)

This results in inequality to use rights, which should be human rights for all by creating:

1. restrictions of individual access  (who can get a fair trial, the ability to appeal)
and
2. reducing the universality of application to human rights law (limiting the circumstances and reasons ‘the how and when’ under which rights may be applied)
I posted my thoughts on this, after the proposals, yesterday.
These are the changes in progress right now. So what of the actual projects underway or recently effected?

Current threats in practice to our UK Human Rights

Mr. Grayling said this week that any future policy change will continue to ensure to promote the values of individual human dignity, equal treatment and fairness as the foundations of a democratic society. Many disagree.

The whole debate of this future policy change may already be doing real harm to the spirit of the law and those ideals today.

In my opinion, current actions are having real effect today in practice which risk undermining rather than strengthening our position towards universal human rights.

1. the recent changes which undermine access to use our rights, [access and universal applicability for all]
2. what value rights are given within current policies and practices,
3. the direction of travel in recent legislation, such as in surveillance, affecting universal rights for all.

It should come as no surprise then to hear of a more wholesale move towards the removal of rights in the proposal to repeal the Human Rights Act, and more. Steps have been taken on this path for some time.

A current sample of some areas with flaws in their approach to human rights include from my lay perspective:

If we in the ordinary public, in response to the proposals this week, are now concerned about about the theoretical threats to human rights by a potential future government, and care about getting it right, I’d suggest we:

don’t wait to worry about what might be in June next year. Encourage those who can, such as our MPs, to look at these real and practical human rights’ threats today. Support MPs & others who are.

************************
*there is clearly more of significance in this area, with which those better informed and active than me would say is missing, but with which I’ve not taken as close an interest. The Deregulation Bill will potentially affect NHS bodies, and I’ve looked at it before on care.data.

Notes on the proposals, and my references below:

medConfidential – campaign for confidentiality and consent in health and social care – seeking to ensure that every flow of data into, across and out of the NHS and care system is consensual, safe and transparent

On Legal Aid – consultation responses or write to your MP: http://www.lawsociety.org.uk/news/stories/moj-consultation-on-duty-crime-contracts-support-pack-for-member-responses/

For reference – background Bil of Rights / scrapping the HRA

The outline future proposal this week suggested, “A majority Conservative Government will scrap Labour’s Human Rights Act, and will end the ability of the European Court of Human Rights to order changes to British laws.” [Jack of Kent, October 2nd]

Some of these plans were discussed here> on the Daily Politics. From 32.30 minutes in.

The plans have been met with widespread criticism in the press and by campaigners showing where the plans are flawed.

Myths abound how human rights are applied inappropriately to whom, and how they lack common sense.

In contrast, real examples have been presented of when the Human Rights Act and ECHR have been used to enhance and protect UK citizens, not least in the Mirror.

Looking to the future, individuals have further pointed out the fundamental flaw if limits of application were to be brought in which would for example, not use the law for ‘trivial cases’.

Tim Hancock, campaigns director of Amnesty UK, said in the International Business Times of this week’s announcement: “This is electioneering on the backs of Europe’s most vulnerable.

“Under these plans human rights would be reserved for only those people the Government decides should get them.”

Whilst we may each have our own political opinions, it is valuable to stay outside them and see changes objectively.

We must also see past the UKIP defection, knee-jerk reaction which conflates everything ‘Europe’, into something from which which the UK could ‘opt out’. As long as Britain remains a signatory to the ECHR, UK citizens could still directly petition the European Court of Human Rights in Strasburg to hear their case. In fact, could be more likely to, rather than go through the British courts first. These proposals conflate the 1951 Convention on Human Rights, the UK 1998 Human Rights Act and our rights under current European law, and more.

If next May, a Conservative majority were to be elected, this proposal might form a basis of proposed legislative changes.

It is highly unlikely to be as is, or without debate. It is a partisan approach which ignores the fact that cross parliamentary support would likely be needed, as was the case when Parliament voted in favour of the introduction of the UK Human Rights Act in 1998.

But that is an if, and thus far, actually moving towards this legislative change is theoretical.