First they came for the lists of lecturers. Did you speak out?

Last week Chris Heaton-Harris MP wrote to vice-chancellors to ask for a list of lecturers’ names and course content, “With particular reference to Brexit”.  Academics on social media spoke out in protest. There has been little reaction however, to a range of new laws that permit the incremental expansion of the database state on paper and in practice.

The government is building ever more sensitive lists of names and addresses, without oversight. They will have access to information about our bank accounts. They are using our admin data to create distress-by-design in a ‘hostile environment.’ They are writing laws that give away young people’s confidential data, ignoring new EU law that says children’s data merits special protections.

Earlier this year, Part 5 of the new Digital Economy Act reduced the data protection infrastructure between different government departments. This week, in discussion on the Codes of Practice, some local government data users were already asking whether safeguards can be further relaxed to permit increased access to civil registration data and use our identity data for more purposes.

Now in the Data Protection Bill, the government has included clauses in Schedule 2, to reduce our rights to question how our data are used and that will remove a right to redress where things go wrong.  Clause 15 designs-in open ended possibilities of Statutory Instruments for future change.

The House of Lords Select Committee on the Constitution point out  on the report on the Bill, that the number and breadth of the delegated powers, are, “an increasingly common feature of legislation which, as we have repeatedly stated, causes considerable concern.”

Concern needs to translate into debate, better wording and safeguards to ensure Parliament maintains its role of scrutiny and where necessary constrains executive powers.

Take as case studies, three new Statutory Instruments on personal data  from pupils, students, and staff. They all permit more data to be extracted from individuals and to be sent to national level:

The SIs typically state “impact assessment has not been prepared for this Order as no impact on businesses or civil society organisations is foreseen. The impact on the public sector is minimal.” Privacy Impact Assessments are either not done, not published or refused via FOI.

Ever expanding national databases of names

Our data are not always used for the purposes we expect in practice, or what Ministers tell us they will be used for.

Last year the government added nationality to the school census in England, and snuck the change in law through Parliament in the summer holidays.  (SI 808/2016). Although the Department for Education conceded after public pressure, “These data will not be passed to the Home Office,” the intention was very real to hand over “Nationality (once collected)” for immigration purposes. The Department still hands over children’s names and addresses every month.

That SI should have been a warning, not a process model to repeat.

From January, thanks to yet another rushed law without debate, (SI 807/2017) teen pregnancy, young offender and mental health labels will be added to children’s records for life in England’s National Pupil Database. These are on a named basis, and highly sensitive. Data from the National Pupil Database, including special needs data (SEN) are passed on for a broad range of purposes to third parties, and are also used across government in Troubled Families, shared with National Citizen Service, and stored forever; on a named basis, all without pupils’ consent or parents’ knowledge. Without a change in policy, young offender and pregnancy, will be handed out too. 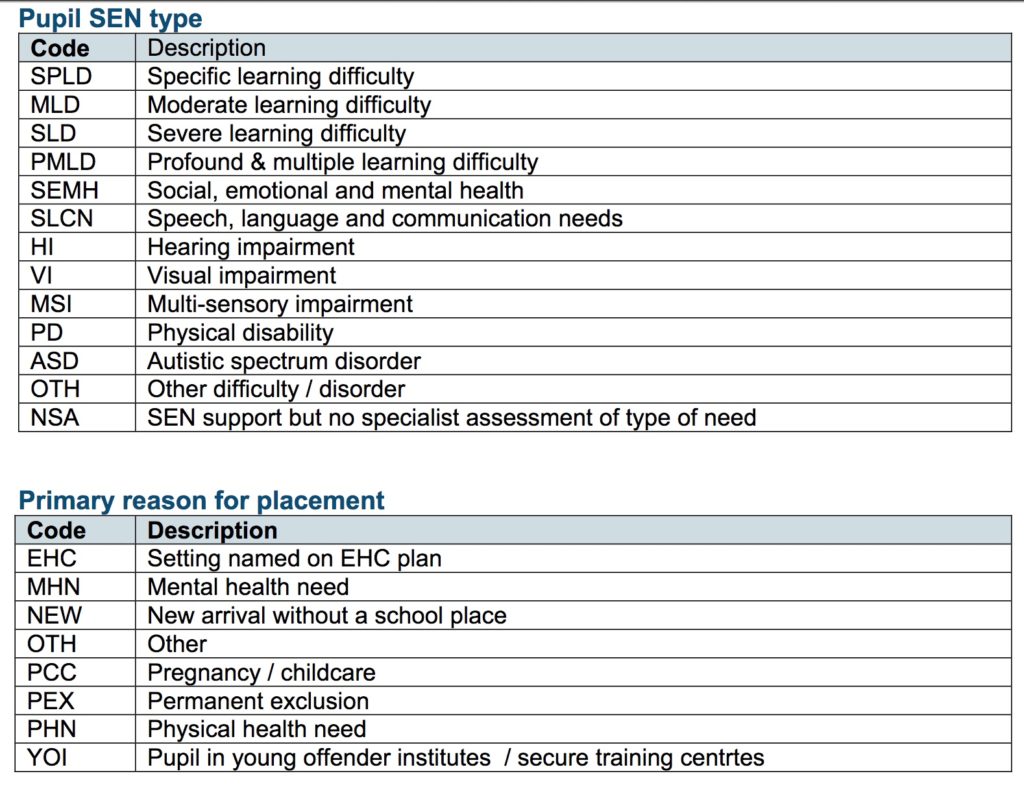 Our children’s privacy has been outsourced to third parties since 2012. Not anonymised data, but  identifiable and confidential pupil-level data is handed out to commercial companies, charities and press, hundreds of times a year, without consent.

Near-identical wording  that was used in 2012 to change the law in England, reappears in the new SI for student data in Wales.

The Wales government introduced regulations for a new student database of names, date of birth and ethnicity, home address including postcode, plus exam results. The third parties listed who will get given access to the data without asking for students’ consent, include the Student Loans Company and “persons who, for the purpose of promoting the education or well-being of students in Wales, require the information for that purpose”, in SI No. 886, the Education (Student Information) (Wales) Regulations 2017 (W. 214).

The consultation was conflated with destinations data, and while it all sounds for the right reasons, the SI is broad on purposes and prescribed persons. It received 10 responses.

Separately, a 2017 consultation on the staff data collection received 34 responses about building a national database of teachers, including names, date of birth, National Insurance numbers, ethnicity, disability, their level of Welsh language skills, training, salary and more. Unions and the Information Commissioner’s Office both asked basic questions in the consultation that remain unanswered, including who will have access. It’s now law thanks  to SL(5)128 – The Education (Supply of Information about the School Workforce) (Wales) Regulations 2017. The questions are open.

While I have been assured this weekend in writing that these data will not be used for commercial purposes or immigration enforcement, any meaningful safeguards are missing.

Where are the communications to staff, students and parents? What oversight will there be? Will a register of uses be published? And why does government get to decide without debate, that our fundamental right to privacy can be overwritten by a few lines of law? What protections will pupils, students and staff have in future how these data will be used and uses expanded for other things?

Scope creep is an ever present threat. In 2002 MPs were assured on the changes to the “Central Pupil Database”, that the Department for Education had no interest in the identity of individual pupils.

Children’s names are used to match records in an agreement with the Home Office handing over up to 1,500 school pupils’ details a month. The plan was parliament and public should never know.

This is not what people expect or find reasonable. In 2015 UCAS had 37,000 students respond to an Applicant Data Survey. 62% of applicants think sharing their personal data for research is a good thing, and 64% see personal benefits in data sharing.  But over 90% of applicants say they should be asked first, regardless of whether their data is to be used for research, or other things. This SI takes away their right to control their data and their digital identity.

It’s not in young people’s best interests to be made more digitally disempowered and lose control over their digital identity. The GDPR requires data privacy by design. This approach should be binned.

Meanwhile, the Digital Economy Act codes of practice talk about fair and lawful processing as if it is a real process that actually happens.

That gap between words on paper, and reality, is a caredata style catastrophe across every sector of public data and government waiting to happen. When will the public be told how data are used?

Better data must be fairer and safer in the future

The new UK Data Protection Bill is in Parliament right now, and its wording will matter. Safe data, transparent use, and independent oversight are not empty slogans to sling into the debate.

They must shape practical safeguards to prevent there being no course of redress if you are slung into a Border Force van at dawn, your bank account is frozen, or you get a 30 days notice-to-leave letter all by mistake.

To ensure our public [personal] data are used well, we need to trust why they’re collected and see how they are used. But instead the government has drafted their own get-out-of-jail-free-card to remove all our data protection rights to know in the name of immigration investigation and enforcement, and other open ended public interest exemptions.

The pursuit of individuals and their rights under an anti-immigration rhetoric without evidence of narrow case need, in addition to all the immigration law we have, is not the public interest, but ideology.

If these exemptions becomes law, every one of us loses right to ask where our data came from, why it was used for that purpose, or course of redress.

The Digital Economy Act removed some of the infrastructure protections between Departments for datasharing. These clauses will remove our rights to know where and why that data has been passed around between them.

These lines are not just words on a page. They will have real effects on real people’s lives. These new databases are lists of names, and addresses, or attach labels to our identity that last a lifetime.

Even the advocates in favour of the Database State know that if we want to have good public services, their data use must be secure and trustworthy, and we have to be able to trust staff with our data.

As the Committee sits this week to review the bill line by line, the Lords must make sure common sense sees off the scattering of substantial public interest and immigration exemptions in the Data Protection Bill. Excessive exemptions need removed, not our rights.

Otherwise we can kiss goodbye to the UK as a world leader in tech that uses our personal data, or research that uses public data. Because if the safeguards are weak, the commercial players who get it wrong in trials of selling patient data,  or who try to skip around the regulatory landscape asking to be treated better than everyone else, and fail to comply with Data Protection law, or when government is driven to chasing children out of education, it doesn’t  just damage their reputation, or the potential of innovation for all, they damage public trust from everyone, and harm all data users.

Clause 15 leaves any future change open ended by Statutory Instrument. We can already see how SIs like these are used to create new national databases that can pop up at any time, without clear evidence of necessity, and without chance for proper scrutiny. We already see how data can be used, beyond reasonable expectations.

If we don’t speak out for our data privacy, the next time they want a list of names, they won’t need to ask. They’ll already know.

“First they came …” is with reference to the poem written by German Lutheran pastor Martin Niemöller (1892–1984).