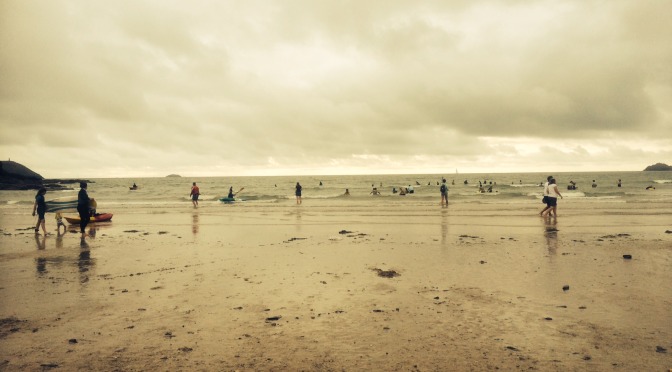 This year’s National Poetry Day is today, Thursday 2 October.
The theme for 2014 is ‘remember’.

Memories of Jacob’s Room – At the Sea Lane Cafe

Beyond the pane of glass,
endless strata of sands stretch out to the lighthouse.
Wet swathes of brown and grey in irregular ridges,
in donkey colours.
I think of the rides of childhood he never had.
The sky sleeps snug above,
inverted greyness of the ground,
tucked in
and thickly cloud clad.

Inside the adults sit, each at a table,
one a group of six absorbed in talk of the breakfast,
stolen from the office fridge.
Told by a man wearing tortoiseshell rims
around elegant eyes,
deep in experience,
face etched with laughter, he grins.
His white-grey hair merging with the wintry sky beyond,
beyond the glass.
I drift into daydream.

‘That’s your peugot, the blue? Isn’t it? You’ve left your lights on.’

An older woman gets up, keys in hand.
Dragged from her steaming reverie,
thoughts abandoned.
Dragged back outside into the cold mainstream of life
by the saving, searching beams of her car.
She stays outside and walks along the ridge.
Kitesurfers catch the early morning offshore breeze
on their voyage out.

And I,
I think of Virginia Woolf
and her pebbles
and of knitting blue woolen stockings
which were so small.