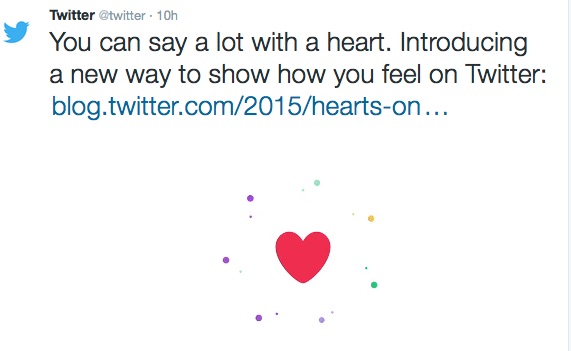 I’ve got 4,652 of them, and there’s plenty of things in there I don’t *like*. Does it matter? Yes, because Twitter’s replaced the meaning that I had given to my use of a label, with a new one.

Users have lost the benefits the neutral favorite star gave humans who can read and interpret nuance, sarcasm and humour, that data analytics tools cannot. The change has deleted context and flattened every emotion to a ‘like’ regardless of its presentation.[1] Twitter has reduced the range of meaning given to a favorite with a sentiment that is on or off in a ‘like’.

To me favorite was a verb, a non-value based indicator of preference that I could action to indicate a range of interaction in context, with or without sentiment. Twitter seems to have seen it as a noun which allowed only one,  if it believed “you might like a lot of things, but not everything can be your favorite.”

This sums up the change to me. For users Twitter is  about action and interaction. To Twitter it’s about stuff.

I suspect a change that is more geared to machine reading and being able to use the data with more confidence by commercial third parties because ‘like’ is more defined than the range of meaning users assigned through a star and favorites in the past. It will be interesting to see what change it brings in big data analysis in months to come.

So while what it looks like matters for its use (especially with professional or sensitive content) it’s how the click is interpreted that adds the like, that is more important than how it looks on the screen. And we’ve lost some value in how we can use it.

I’ve three suggestions. Two for Twitter HQ and one for developers.

Dear Twitter, if we have to have hearts and likes, can we at least have them default to our own colour scheme and not impose SHOUTY SCARLET please? And we need a bookmark tool. Thanks.

and Developers? If you can create an app that would give me control to mass un-like my tweets to date, I’d use it. I’d even pay for it. And like it.

Not because of how hearts look to others onscreen. Not because the word like has overwritten my previously starred favorites,  although both these things matter for perception of use going forward.

Why I want to change my past favorites to undo their relabelling as likes is because although what the icon looks like is irrelevant, (you can have a heart, a star or a flaming taco if you prefer through tools like Stylish or Starback) it’s how Twitter is purposing the data it collects through the use of that function and how they are used by others that matters.

By adding the click that is not RT that-shall-not-be-named (favorite or like as you choose to call it) you add data to your profile of use that Twitter uses and is used by third parties.

And all the things you or I may have previously bookmarked with a star, may not be things we like, yet someone else may interpret that data to mean we do. This could be more important if web browsing is to become accessible by the state and would concern me how generic ‘likes’ could be misinterpreted. Especially in other countries.

It feels rather unfair to attribute a meaning that I did not give to historical content. The shift in meaning that has been attributed to what I did in the past is outwith my control.

While I can control what I add a like to now and in future, having lost its range of empathy, it offers less value to me as a user than favorite but I suspect it is probably more valuable to Twitter. I feel this change is of more benefit to them as an organisation for simplifying behind-the-scenes analytics using my data.

Twitter as a tool offers value others cannot, so a new function to acknowledge and bookmark, would be valuable to users and nice to have to make up for feeling more ‘monetised’ and more value to Twitter. Our data and advertising base are valuable in this ‘free product’ transaction between users and the organisation.

While I will always ‘like’ dancing baby stingrays. I will choose now what I ‘like’ more selectively and use it less widely in future.

And I’ll consider making correction by removing the ‘likes’ attributed to my favorites. I really dislike inaccurate data where it can matter much more, than how it looks on Twitter.[3]

Granular definitions matter and was useful in the neutral ‘favorite’, because not all ‘likes’ are equal as I’ll go into more detail in examples.

More detail on why it matters and examples illustrated in ten tweets below.

[1] https://blog.twitter.com/2015/hearts-on-twitter
[2] web browsing could be misinterpreted http://www.theguardian.com/uk-news/2015/oct/30/police-seek-powers-to-access-browsing-history-of-uk-computer-users
[3] https://nandosigona.wordpress.com/2015/10/13/the-politics-of-counting-people-at-borders/ on the importance of accurate  counting of people in immigration