When England play Uruguay this week,they might be hoping the Southern American team’s secret weapon may have been taken away.

Not one of the world’s best players whom we know from playing at Liverpool, Suarez, but the team supply of dulche de leche, as the BBC reported:

“Brazilian officials say they confiscated 39kg (86lb) of caramel spread from Uruguay’s football team as it arrived in Brazil for the World Cup.” 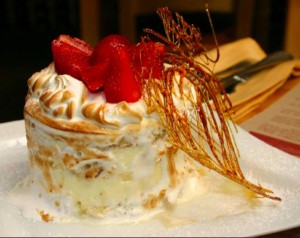 I first discovered dulche de leche when a friend in South America brought me back two jars. She was a very good friend.

It’s a caramelized milk product, made by mixing milk with sugar, baking powder and vanilla extract. has the consistency of a thick sticky nutella and is found in many desserts and pastries from the region.

At the time, I ran a cupcake company and so the Dulche de Leche based, Salted Caramel cupcake was born.

But nothing has ever tasted as good as the Torta de Tres Leches I had in Santiago in 2013. So good, it was worthy of the photo above. Mind blowingly sweet, but with a saltiness and lighter-than candy floss sponge, it is a blend of taste and consistency I’ve never had before or since. I can recommend making your own.

I doubt the footballers have time for cake though, so I do wonder what they used it for? Breakfast spread? I should think their diet regimes are planned to the nth degree based on nutritional values.

Answers on a postcard please…