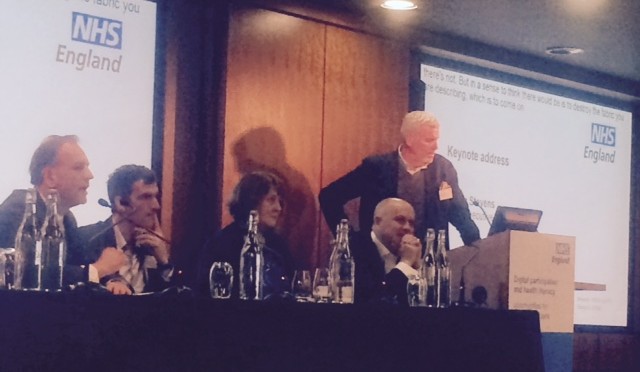 “..smartphones […] the single most important health treatment and diagnostic tool at our disposal over the coming decade and beyond “

That’s what Simon Stevens said at a meeting on “digital participation and health literacy: opportunities for engaging citizens” in the National Health Service this week, at the King’s Fund in London.

It seemed a passing comment, but its enormity from the Chief Executive of the commissioning body for the NHS, made me catch my breath.

Other than inspiration from the brilliance of Helen Milner, Chief Executive of the Tinder Foundation – the only speaker who touched on the importance of language around digital participation – what did I take away from the meeting?

The full text of Simon Steven’s speech is below at the end of this post, but he didn’t elaborate further on this comment.

The first thing I took away to think about, was the impact of the statement.

So I thought about that more in a separate post, part two.

The second, was on consent.

This tied into the statement by Tim Kelsey, Director of Patients and Information at NHS England. It seems that the era when consent will be king is fast approaching, and I thought about this more in part three.

The third key learning I had of the day, which almost everyone I met voiced to me was, that the “best bit of these events is the learnings outside the sessions, from each other. From other people you meet.”

That included Roger who we met via video. And GP Dr Ollie Hart. All the tweeps I’ve now met in real life, and as Roz said, didn’t disappoint. People with experience and expertise in their fields. All motivated to make things better and make things work, around digital, for people.

Really important when thinking about ‘digital’ it doesn’t necessarily mean remote or reduce the people-time involved.

Change happens through people. Not necessarily seen as ‘clients’ or ‘consumers’ or even ‘customers’. How human interaction is supported by or may be replaced by digital contact fascinates me.

My fourth learning? was about how to think about data collection and use in a personalised digital world.

Something which will be useful in my new lay role on the ADRN approvals panel (which I’m delighted to take on and pretty excited about).

Where, for who, and from whom data is collected varies enormously. It’s going to vary even more in future if some will have free access to apps, to wifi, and others be digitally excluded.

For now, the overall effect is perhaps only ripples on the surface (like interruptions to long-term research projects due to HSCIC data stops after care.data outcry) but research direction, and currents of thought may shift fundamentally if how we collect data changes radically for even small pockets of society, or the ‘worried well’.

My fifth learning, was less a learning and more the triggering of lots of questions on wearables about which I want to learn more.

#digitalinclusion is clearly less about a narrow focus on apps than applied skills and online access.

But I came away wondering how apps will affect research and the NHS in the UK, and much more.

[Next: part two #NHSWDP 2: Smartphones: the single most important health treatment & diagnostic tool at our disposal – on wearables]

[And: part three #NHSWDP 3: Wearables & Consent: patients will ‘essentially manage their data as they wish’. What will this mean for diagnostics, treatment and research and why should we care?]

Full text of the speech given by Simon Stevens, Keynote speaker:

“And the guiding principle of that integration has got to be care that is personal, and coordinated around individuals, with leadership of communities and patient groups.

“There is no way that can happen without a strong, technological underpinning using the information revolution which is sweeping just about every other part of the economy.

“We are not unusual in this country in having a health sector which has been a little slower, in some respects, than many other parts of national life to take full advantage of that.

“We are not unusual, because that is the experience of health services in every industrialised country.

“We obviously have a huge opportunity, and have a comparative advantage in the way that the NHS is organised, to put that right.

“We know that 8 out of 10 adults are now online, we know that two thirds of people in this country have got smartphones which is going to be the single most important health treatment and diagnostic tool at our disposal over the coming decade and beyond.

“And so when you of course then get serious about who are those six and a half million people, many of them are our highest users of services with the greatest needs.

“So this is not an optional extra. This has got to be central about what the redesign of care looks like, with a fundamental power shift actually, in the way in which services are produced and co-produced.

“This agenda goes to the heart of what we’ve got to get right, not just on inequalities but around co-production of services and the welcome steps that have been taken by the organisations involved, I think that the point is obviously we have now got to scale this in a much more fundamental fashion, but when you look at the impact of what has already been achieved, and some of the work that has already been done by the Tinder Foundation, you take some of the examples here, with the Sikh community in  Leicester around diabetes, and parenting in other parts of the country, you can see that this is an agenda which can potentially get real quite quickly and can have quite a big impact.

“The early evaluation anyway indicates that about half of people involved say they are leading healthier lives on the back of it, 48% in healthy eating, a third do more physical activity, 72% say they have saved money or time.

“Given that we are often talking about resource poor, time poor communities, that is hugely impactful as well.

“So my role here today, I think is simply to underline the weight that we place on this, as NHS England nationally, to thank all of you for the engagement that you have been having with us, and to learn from the discussion we are about to have as what you see where you see key priorities and what you need from us.”

[March 18, 2015 at the event “Digital Participation and Health Literacy: Opportunities for engaging citizens” held at the King’s Fund, London]